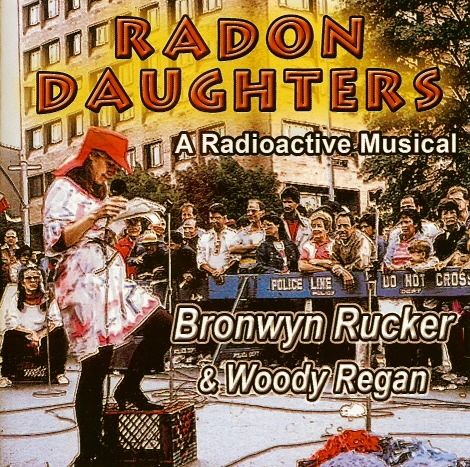 Radon Daughters on Original Cast Records.
It is an original Musical with Book and Lyrics

A Radioactive Musical, featuring Bronwyn Rucker and Woody Regan has been released on

CD by Original Cast Records.  With book and lyrics by Ms. Rucker and music composed by Mr. Regan and Ms. Rucker, the CD captures the essence of the protest era of the 60s and the emerging feminist movement that accompanied it. The title refers to the short-lived atoms into which a radon atom decays, referred to collectively as radon daughters.  The musical - which originally was performed on the streets of NYC and in off-off-Broadway venues - has been recreated and recorded in this unique CD.

I have been listening to a lot of cabaret CDs lately on my iPod Shuffle, and when I got home and loaded it on the iPod I was suddenly overcome with nostalgia.  This CD captures, as no other one possibly can, the means by which performers and artists moved to the forefront of the protest era of the 60s and 70s. These were my college years and the years of my development from being a student to becoming a true member of society. Songs like these were the "theme music" of that era. Take a look at the cover art to get a small image of what the era was like and how these songs were performed in those days.